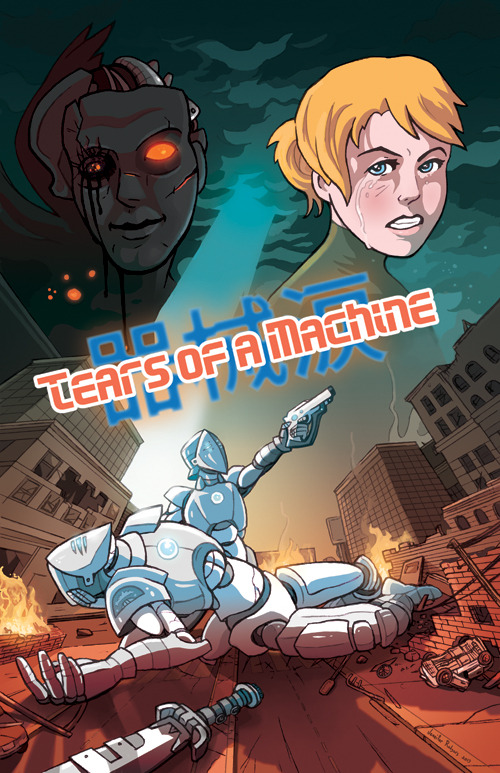 Tears of a Machine is a tabletop story game (or RPG) of giant robots and teenage pilots inspired by the mecha anime shows that I love: Neon Genesis Evangelion, Fafner: Dead Aggressor, Gunparade March and others. Playing the character of a young pilot, you’ll be connected to the brain of a SAInt, a robot crusader with a dangerous will of its own, and sent to fight the alien raiders and their monstrous war machines.

A game of Tears of a Machine is about the characters first. The rules and situations of the game are tuned to create stories about the pilot’s hopes, dreams, and fears. A pilot’s ego can turn failure into success or mire a pilot in depression. What happens in the classroom or at the diner is just as important for a pilot as what happens on the battlefield.

Fast-paced combat, unrequited romances, dangerous alien technology, brutal robot foes, a secret society of zealot scientists, teamwork against overwhelming odds, and evenings spent goofing off at the video arcade. Get together with your friends and share those moments of joy and pain and wonder and cry your eyes out at the controls of a giant robot.

The game system scales, handling simple scenes with a single die roll and “zooming in” when more details are needed. Volleys of gunfire on the battlefield or traded serves in the volleyball match all use the same straightforward and fast­-moving rules. The events in an episode and the strength of their foes are all queued off the characters and their interests. The GM can quickly and easily build adventures around what the players enjoy.

Find out more information and back this project on Kickstarter.com!