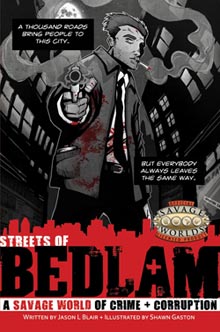 Missed out on the Kickstarter? Don’t sweat it. Streets of Bedlam: A Savage World of Crime + Corruption is now available for pre-order!

Streets of Bedlam: A Savage World of Crime + Corruption is equal parts neo-noir, pulp detective fiction, and a bit of the ol’ ultraviolence thrown into a cement mixer and poured on top a heap of nameless bodies no one will ever miss.

It’s a modern urban setting full of despicable people doing awful things in the name of G*d, money, politics, or to pay off old debts. The stories shine light on the dark places of the human heart but it’s about finding diamonds in the rough, about good people in bad situations. The heroes may have questionable means but they have good intentions.

Of course, you know what they say about good intentions.

Streets of Bedlam: A Savage World of Crime + Corruption is due out in pdf on May 16th and in print come early June.